Click on an option to get started. If you've saved your payment information with ActBlue Express, your donation will go through immediately.

Yes, Count Me In

Our campaign is powered by everyday Americans pitching in what they can. Chip in now -- and if you're able, make it monthly.

Join our grassroots community and receive regular updates from our campaign. 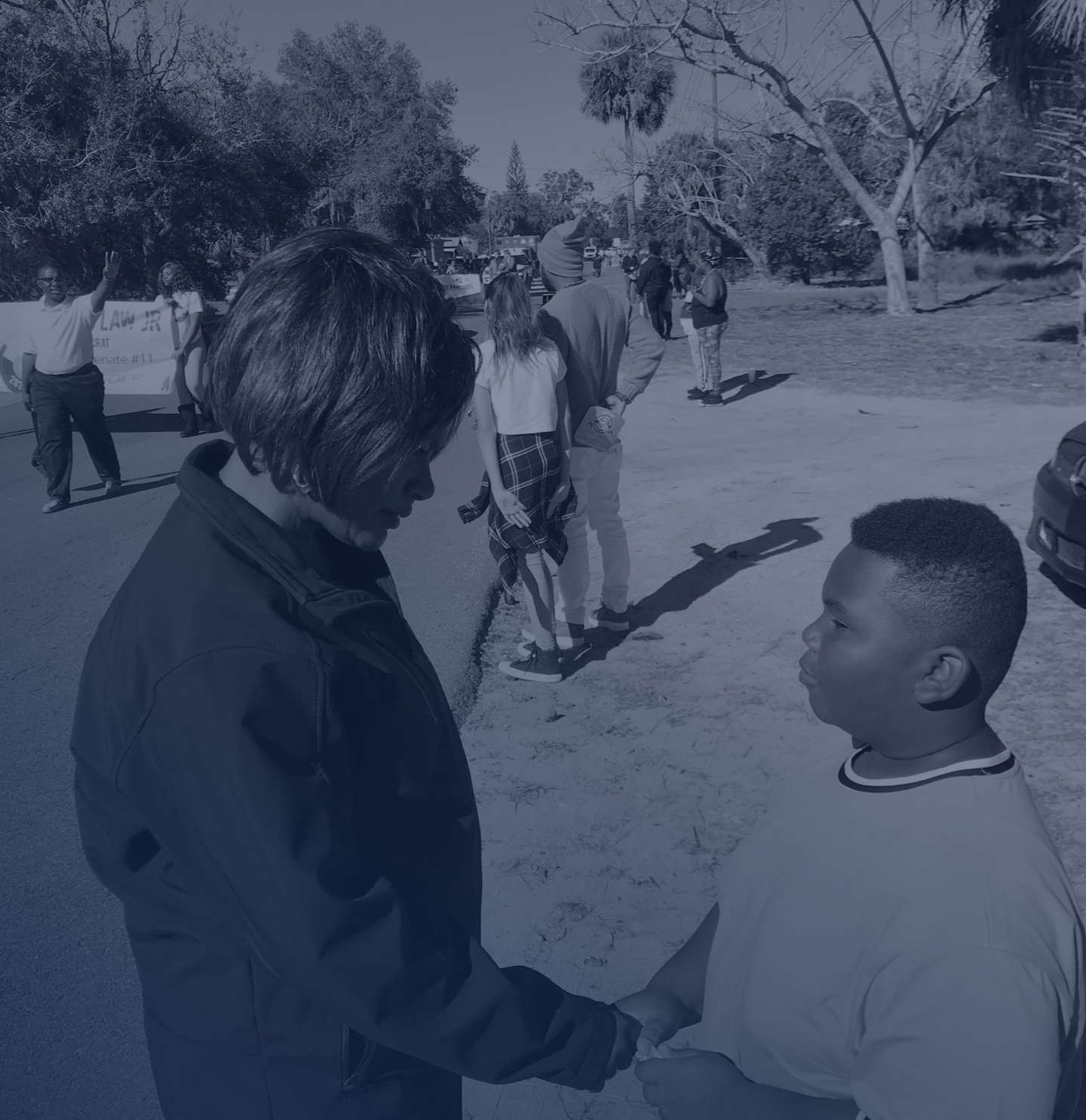 “I believe that only in America can a little Black girl, the daughter of a maid and a janitor, growing up in the South in the ’60s, have such an amazing opportunity. No one can make me give up on America.” -Val Demings

Long before she would become Orlando's first female Chief of Police, Val Butler Demings learned from her parents about the American Dream. They didn't have much: two parents and seven children in a small wood-framed house in Jacksonville.

Her mother Elouise Butler worked as a maid; her father James as a janitor, landscaper, and orange picker — as many jobs as it took to get by. "Work hard and play by the rules," they taught her. "Have faith." "Treat others as you want to be treated." "Never tire of doing good." In America, these were the building blocks of a successful life.

She took her first job at 14 as a dishwasher. Worked hard in school. Became the first in her family to go to college, working at a fast food restaurant to pay her way. She became a social worker, working to protect children in broken homes. Then, dismayed at a system that was leaving too many families behind, she signed up to become a police officer — an officer with a social worker's heart.

It was a tough path, and tougher still in the 80s for a woman and Black American in a profession that had few of either. But no obstacle had ever deterred the daughter of James and Elouise. She graduated from the police academy with citations for excellence, and quickly earned a reputation as a bold, creative cop willing to take on conventional thinking and the toughest parts of the city.

Chief Demings served 27 years and at every rank level in the department. She commanded the Special Operations division and handled the department's highest-profile tasks. She coordinated the response of the Airport Division on 9/11. And in 2007, she made history when she was appointed to serve as the city’s first female Chief of Police.

The eyes of the city were on her. The financial crisis was squeezing budgets. But by taking the tough fights head-on, she did more with less, kept officers on the street, and crushed violent crime, reducing it by 40%.

In 2016, Chief Demings was elected by the voters of Florida's 10th District to serve in Congress. She swiftly gained a reputation as a tireless champion for public safety, civil rights, and the American Dream that had given her a chance to succeed. She gained widespread acclaim for her conduct as a deliberative and justice-focused impeachment manager during the impeachment trial of former President Donald Trump.

Rep. Val Demings and her husband Jerry Demings (currently serving as Mayor of Orange County) have been blessed with three children and five grandchildren. When she's not serving her constituents and spending time with her family, she rides her Harley-Davidson Road King Classic.

Through all of it, she has never tired of doing good, the lesson taught to her by her parents in their home in Jacksonville. She has never given up on the promise of what America could be, if we have the bravery to fight for it, together.

Click on an option to get started. If you've saved your payment information with ActBlue Express, your donation will go through immediately.

Yes, Count Me In

By providing your cell phone number you consent to receive recurring campaign & donation updates from Val Demings for U.S. Senate, including by automated text messages. You can expect to receive no more than 10 texts per week. Txt HELP for help, STOP to end. Msg&Data rates may apply. Privacy Policy & Terms of Service apply.